Teddy Riley appeared on VLAD TV, where the R&B singer reveals why Tupac’s original “Toss It Up” record was pulled off the radio by Jimmy Iovine.

Released in the summer of 1996, ‘No Diggity’ performed by Blackstreet featured Dr. Dre who had left Death Row records months prior. The single would peak at number one on the Billboard 200. Riley, who was part of the R&B group, was enjoying the early success of the record, until he shockingly heard a Tupac version on the radio.

“I called Jimmy and I said, ‘Jimmy, what’s this sh*t? I hear our sample, our record on the radio and it’s Tupac on there. You put Tupac on the record?’ He said, ‘What are you talking about?’ I said, ‘Jimmy it’s a record. This is your label. This is Interscope,'” Riley recalled.

Immediately after Jimmy Iovine hung up the phone with Teddy Riley, the music exec made a phone call of his own. From there on, Tupac’s original ‘Toss It Up’ song was never played again on the radio. “This is when I knew the power of him. I knew he pushed a button and that record disappeared off the radio,” Riley said on VLAD TV.

Riley was clearly upset about the Tupac record, but probably more so due to the fact his former Guy member, Aaron Hall, was on the song as well. Back in the late 80s, Riley, Aaron Hall and Aaron’s younger brother formed the R&B group, Guy. After a fallout between Aaron and Riley, Teddy Riley went on to form another R&B group, Blackstreet.

Months later and a new version of Tupac’s “Toss It Up” was released on his first posthumous release, “The Don Killuminati: The 7 Day Theory.” The “No Diggtiy” record was once again sampled, while featuring Aaron Hall, Danny Boy and K-Ci & JoJo, and a brand new Tupac verse dissing Dr. Dre.

“We knew something like that was gonna happen, because when I put Dr. Dre on the record, I guess I became the “other” side. So, that’s how that record came about. I was disappointed,” Riley said. “It was no beef, but I ended up in the middle, because Dre and I were on “No Diggity.” 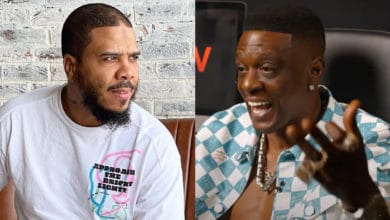