Snoop Dogg appearing on Big U’s podcast Checc’n ~ In, spoke about Tupac’s message that did not get passed on which almost led to a fight with Kurupt.

Exclusively via Caffeine TV, Big U’s Checc’n ~ In podcast premiered with hip hop royalty, Snoop Dogg. Caffeine has partnered with the popular Checc’n ~ In Podcast with Big U to bring all-new video episodes of the hit interview series exclusively to the platform, two weeks before they release on all major podcast providers. Fans can tune-in every Sunday to catch new episodes of via the “Checc’n ~ In” channel on Caffeine (HERE) with upcoming guests including Draymond Green, Mike Tyson, 2 Chainz and more.

After breaking down how he was able to convince Suge Knight to bail Tupac out of jail and have Shakur join the Death Row records family, The Dogg Father explained how Tupac made him a better artist and leader during his time with the world’s most dangerous record label.

“‘Pac showed me how to write faster and how to be a leader. He taught me structure, cause back then everybody was just everybody,” Snoop explained. “One night that n***a pulled me to the side and was like, ‘Everything we do in Death Row is military.’ This n***a was probably like two days in and he’s checking me on what we finna be doing.”

Tupac had just been released on a $1.4 million dollar bond posted by Suge Knight. Tupac’s impact also had a positive affect on others on the label, as their work ethic would also improve. (View: Kurupt On The Number One Thing Tupac Changed At Death Row Records)

Enjoying their recent success which included making hit records and for Snoop beating out his murder case, the Death Row family went over to Belize for a vacation. “So we on the beach,” Snoop Dogg recalls. “Kurupt says something to Tupac and Tupac like, ‘N***a you ain’t even suppose to be talkin to me.’ And Kurupt like, ‘N***a what?!’ They going back and forth and then Tupac told Kurupt, ‘You’re not even on my level. I’ll have the Outlawz deal with you.”

“That n***a Nate Dogg stood up like, ‘What the f**k am I gonna be doing when that’s happening?’ Sh*t got shi**y fast. MC Hammer tried to jump in,” Snoop recalled. By then it was too late, Tupac and Nate Dogg squared up and was ready to fight.

“‘Pac is looking at me and I’m like damn I forgot to tell these n***as,” Snoop said jokingly. It would take Suge Knight to finally break things up and get everyone on the same page. Seconds later all was forgotten and everyone continued enjoying their trip.

Kurupt would appear on The Breakfast Club in 2018 and detailed another incident that took place betwen him and Tupac which again almost ended up in a fist fight. According to the Philly born rapper, Tupac thanked Kurupt for Tha Dogg Pound’s single “New York, New York’ which gave Tupac inspiration as he was locked behind bars. The two formed a bond and Kurupt told Tupac to treat him as one of his Outlawz members and call him out whenever he was out of line. Well, it didn’t take long for that to happen.

“I was beating my Hennessey bottle on the table,” Kurupt explained. “He told me stop hitting my Hennessey bottle on the chair. I’m like, ‘Who you talking to? You knew around here.’ Of course I was hammered. Ah man, he got so mad. I’ll take you upstairs right now and whoop your ass and bring you back downstairs and we smoke a blunt. I said, ‘Ah man this boy is nuts.’ Nate comes over, ‘I don’t know why people think people gonna fight and we still be friends.’ Here comes Daz, ‘I’ll fight you. I’ll fight you right now. Come over here.’ ‘Pac goes, ‘Man, I can’t go nowhere without my Outlawz’ and he just stomped off.”

Unfortunately for Kurupt and Tha Dogg Pound, they were unable to reconcile with Tupac as Shakur would lose his life after being shot 4 times on the Vegas strip. 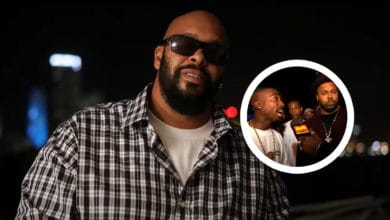 Outlaw: The Saga Of The Shakurs – What We Know So Far